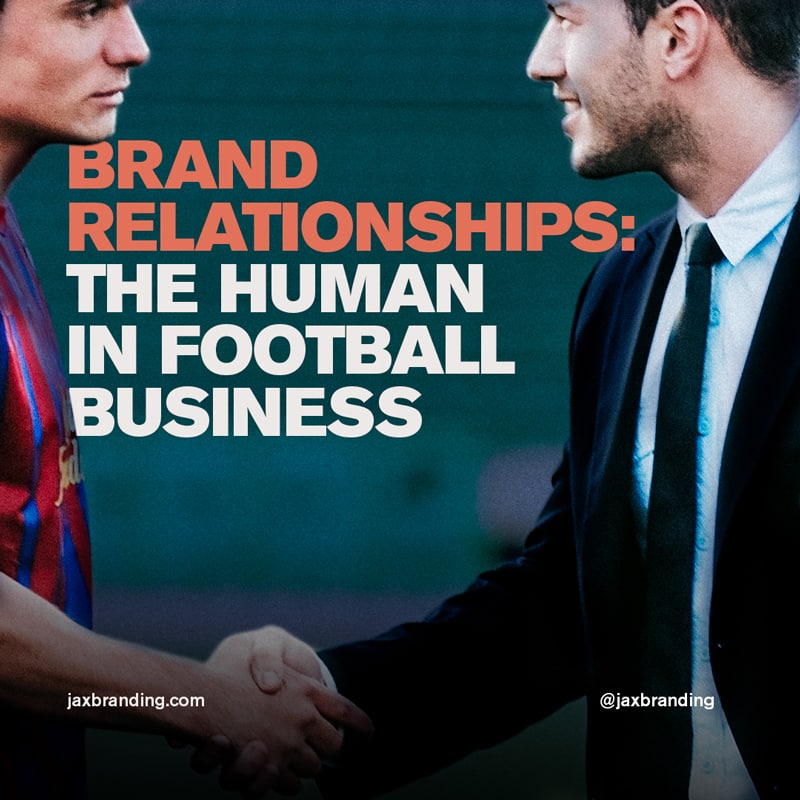 In an industry flooded with money, how can football brands ensure that they are creating meaningful human relationships?

Strong brand relationships are key in both B2C and B2B settings. We see their necessity every day, and it’s likely you and I buy into these relationships regularly. For example, you may have used a voucher or coupon in the last month. If so, you’ve subconsciously bought into a brand relationship with that store. That voucher may have been a present, or even the result of successive trips to the store.

Either way, by using that token, your interaction with said brand has moved a layer deeper – without necessarily even realising it.

By definition, it means ‘the repeated interactions between a brand and a customer that start to reflect similar characteristics of relationships between people, such as love, connection, interdependence, intimacy, and commitment’. In 1995, Fajer and Schouten classified brand relationships into two different categories.

These were lower order and higher order, ranging from ‘casual friends’ to ‘brand addiction’.

In the football industry, brand relationships tend to be higher order.

We see this both in the physical game – die-hard fans travelling to games through thick and thin – and even in newer realms such as e-sports. Take the FIFA game series, for example. Players become, arguably, ‘addicted’ to new versions of the game released annually.

When it comes to popular features like Ultimate Team, players crave the validation of supporting clubs and players with the highest rated cards. As a game, EA Sports play on the intense brand loyalty that people have not only to their clubs, but to football in general.

But in ‘real-life’ football, are brand relationships being diluted?

After the European Super League scandal of 2021, the brewing storm of football-for-profit broke. Fans, rightly enraged, began to see football for what it has become – an industry for money. When the English clubs involved in the project pulled out – namely Liverpool, Arsenal, Manchester City, Manchester United, Tottenham Hotspur, and Chelsea – fans didn’t necessarily forgive their clubs’ owners, but their support for their clubs never wavered.

Similar examples have been seen across football. Even away from the mega-rich in Europe’s top divisions, fans have protested rising ticket prices, corrupt ownership, and a worryingly uneven playing field.

So, what can we learn about brand relationships in football from these issues?

Firstly, it’s important to understand that the presence of money in the game isn’t the problem. It’s the impact it can have on the key brand relationships that make football a special industry – a truly attachment-worthy ‘brand’ portraying the best and worst of loyalty – but just that little less special.

Wealth in football has a diluting power on human connection that underpins its existence.

Football brand relationships have been forged by decades of emotion and history.

When we look at the many different ‘brand’ relationships present in football, we can make a few conclusions. The relationships that are temporary are often those that rely solely on money. Little emotion transcends them. For example, transfer triangles between clubs (brand one), players (brand two), and agents (brand three), are generally commercial dealings.

That’s not to deny that professional ambition plays a role in transfers – and admirably so – but the club will exist long beyond the players at any given time. As such, we can see how fans can be quick to turn on players, managers, and other significant individuals at clubs and how brand relationships are different in a B2B sense in football.

Simply, these parties’ relationships with clubs are often founded (primarily) in commerciality, rather than in emotion. When millions of pounds are on the line, data and finance take increasing priority in the modern game. This is not necessarily dissimilar to any other industry, but there is one key difference:

How do you build brand relationships? Let’s go back to our voucher/coupon analogy.

When you use a coupon or voucher in a shop, you have bought into that brand’s community. This is because your purchase is based upon either loyalty (you have bought from that company multiple times), or (loose or otherwise) emotional connections; vouchers tend to be presents.

In other words, you’ve bought into something bigger than the traditional supply-and-demand nature of business.

Football is no different. Fans don’t buy into a commercial entity, but will often refer to themselves as ‘fans by birth’. Those who love football, football clubs, and all else good in football are part of a community that is bigger than the sport’s commerciality. As brands, football clubs are powerful as their existence, iconography, and future are all intertwined in one key virtue: passion.

Ever wondered why rebrands of clubs, like that of Leeds United in 2018, have been so unpopular in many instances? Because the sense of community – something recognisable, bringing a sense of togetherness and belonging – is diluted.

Football clubs are naturally strong brands because brand relationships naturally exist within them. To support something is to forge a relationship with it. Football has a unique power in its escapism, its transcendence of class, wealth, and, although still a point of difficulty, race and religion. People feel together – part of something much bigger – as football fans. No matter where you are in the world, you can always relate to the beautiful game.

It’s precisely this humanity that (somewhat ironically) makes football a powerful commercial tool. However, when we keep the fan (the customer) at the heart of everything we do when creating football-centric brands, we can maintain the powerful connections that forge the strongest of relationships within business.