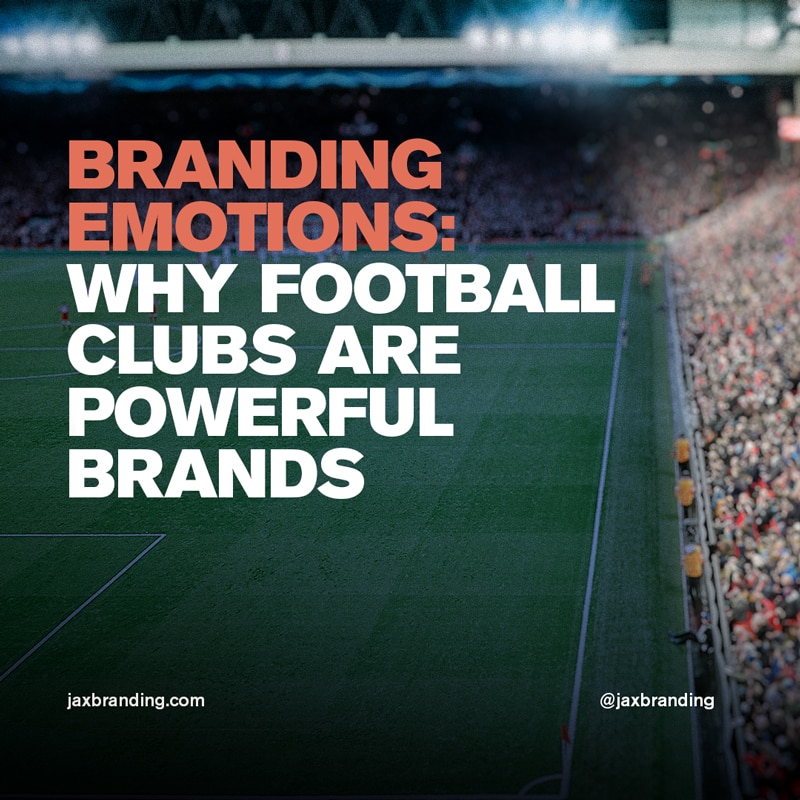 What does football mean to people? What can we learn about football branding from this? And how can we balance community spirit and profit with branding?

Branding emotions. What does this mean?

Can we create a ‘brand’ out of an emotion? Is it possible for emotions to be brands themselves? What is the relationship between branding and emotions?

The relationship between the branding process and human emotion is inseparable. Any good branding project will successfully cause a subconscious, emotional reaction to the visual identity of a business. This can be portrayed through colours, copy, iconography, and even psychological triggers woven throughout a website design.

Complexly, the answer to the aforementioned three questions is, essentially, yes. When it comes to football, businesses – from clubs to leagues to agencies and more – are essentially branding emotions in their daily commercial activities. Let’s take a look at some examples to understand how this works.

There are four main ways in which football clubs create loyalty with fans: badge, kit, stadium, and people. In each of these four categories, clubs are branding emotions.

Each of these categories overlap – the Chelsea badge is an icon of Chelsea because players wear the badge whilst playing for Chelsea in a stadium in Chelsea in front of fans many of whom are from Chelsea. This loosely relates to the concept of the ‘nation state’, but that’s most definitely a branding (and history and politics) lesson for another day.

Essentially, emotions are attached to all of these items of a football club because they create one larger identity: the ‘club’. After all, there is a reason why football clubs are called ‘clubs’. They are a group of people who come together over something they all have in common. It’s branding that creates the glue that holds this group together.

Good branding delves into the heart of the consumer-brand bond. In a traditional sense, this means connecting the problem of the consumer with the solution the business offers. In football branding, these relationships arguably run a little deeper, from generation to generation.

When branding football clubs or football businesses, it’s important to use a mix of longevous symbolism (long-term icons that together form a long-term or ‘overall’ identity) and precise symbolism (short-term events that create emotional touchpoints that particular types of stakeholders can relate to). Both these aspects reach different stakeholders to maximise brand engagement.

‘Playing for the badge’ is a phrase that many fans will have criticised and credited the players who play for their team with. Football club crests are perhaps the most obvious – and most iconic – aspects of football branding.

However, badges are not immortal. Clubs change and update their badges, and over the last few years there has been a flurry of footballing rebrands. Some of the better ones? See Bristol City, Brentford, Manchester City, and FC Nantes to name a few.

There’s often more we can learn about branding emotions in football from the rebrands gone wrong. When Leeds United rebranded, the new logo sucked any soul, spirit or history out of a club steeped in tradition and a strong identity. The reaction from Leeds’ fans was very strong.

The problem was that the badge gave Leeds fans a sense of identity. It was ‘Leeds’ in a symbolic sense. By changing it, the connection between fan and club had been weakened as the latter couldn’t identify with the former.

Football kits come and go faster than players, badges, and stadiums. They are the most changeable thing in a football club’s branding. So, why is ‘branding emotions’ such a relevant phrase when it comes to football kits?

Kits are short-lived. Unlike a badge which is associated with an identity that has grown over decades, specific kits encapsulate the zeitgeists of certain seasons. A successful season makes the association with a certain kit much stronger, in turn essentially writing a particular strip into the history books.

Specific kits are immortalised, helping fans reconnect with the good times in a club’s history. In terms of branding emotions, clubs often capitalise on selling retro merchandise and create specialist campaigns around landmarks in the club’s history. Reading FC, who celebrate their 150th year in existence, created a specific ‘microsite’ dedicated to the anniversary. Their away strip is modelled on the yellow away kit the Royals wore at Wembley when they won the Simod Cup in 1988.

Branding football businesses often leads to the usage of iconic ‘immortalised’ iconography from the club’s past, to almost anchor fans to the club.

The traditional football fan sometimes refers to what some may deem ‘the proper stadium’: four stands, no corners, and the pitch so close that the stars on it were almost within touching distance. As another longevous icon, the stadium is almost the castle in which a club’s identity is maximised and pushed to fans.

We often hear stadiums referred to as ‘fortresses’. This idea isn’t just related to form on the pitch, but to a tangible symbol that fans can quite literally call a second home. We see an example of physical branding here: the design of the club shop, the use of brand imagery around the ground, and even as far as to what is displayed on the big screen at half time.

These aspects create a bigger brand experience that is repeated every other week, for a number of decades in most cases. In a stadium, we see a convergence of the club’s past, present, and sometimes future, embedding it as an icon in a club’s history when it comes to branding emotions.

And finally, the people. On the pitch, players become heroes. Some fail, some write themselves into the history book. Players forge their own personal brands on the pitch, but also can create proverbial ‘cult hero’ status for themselves. Like with kits, players become attached to specific parts of the brand identity of a football club.

However, where they are unique is that – given that the connection between player and fan is, at its core, human – the people on the pitch ultimately define a club’s identity in the short term. It is the sum of these parts and the similarities that fans draw between players past, present, and future, that we see as an example of branding emotions at its most raw.

Players make football a powerful brand alone, given that football is arguably more art than science when it comes to emotional connections. As the ‘face of the club’, they play more of a commercial role than people may assume – on top of the transfer fees and mega-wages. A role that many don’t see at first glance.