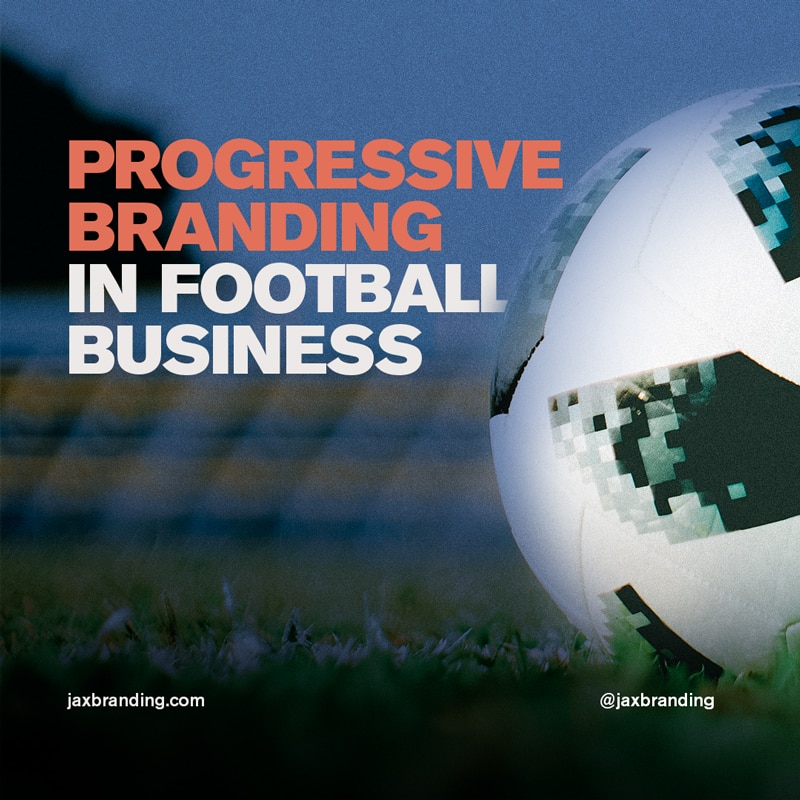 Both socially and commercially, looking forward – not back – helps build strong brands in football today…

‘Progress’ is a word often used in society today. Or, perhaps more specifically, the need for progress. Both socially, and when building strong brands, progress is vital. By continuing to refine and improve operations, businesses need to constantly be looking both inward and outward to adapt their operations to market conditions.

In society more generally, it’s also important to self-reflect and self-improve, especially when it comes to prominent societal issues.

‘Progressive branding’, meanwhile, means different things to different people. In personal terms, brands are having to adapt to a progressively different cultural outlook towards the nature of the individual. The social lens is very much focused on issues such as discrimination that sadly still exist in today’s world; disappointingly, football is no exception.

But there doesn’t have to be a conflict between social progression and business progression. In fact, taking a clear stand against issues such as discrimination, and branding more inclusively, can increase market awareness, potentially strengthen brand loyalty, and expand a consumer base to a different sector of the market.

In football especially, the strong brands that football clubs are within the community have the power to enact social change. However, it’s not only socially that building strong brands is possible in football; on and off the pitch, clubs that strive to continuously improve only go one way.

One of the most intriguing progressive rebrands in recent years has been that of John Lewis/Waitrose. Keen to emphasise their community outlook, and the fact that not only were John Lewis and Waitrose a ‘partnership’ (Waitrose sits under the John Lewis group), but that all of their employees actually owned shares in the brand, the department store and supermarket chains added ‘& Partners’ to their name. Quite literally, they were part of something bigger.

This progressive rebrand can teach us about where the football industry can falter: maintaining connections with its most important stakeholder, the fans. Building strong brands in football should always incorporate the fans at their heart, given that fans essentially make football ‘clubs’ what they are – more than businesses.

Within football, the Premier League’s Rainbow Laces campaign has highlighted the issue of homophobia in football – arguably an issue that does not garner as much attention as it should do in the mainstream game. Following the death of George Floyd in 2020, Nike turned its focus to a series of hard-hitting mini brand campaigns to highlight deep-rooted issues in American society.

The key takeaway from this look at a cross-section of progressive branding across different sectors is that, in each circumstance, each brand has taken further steps to define their own brand identity, or in the case of the Premier League, use their brand recognition and loyalty to champion a growing cause.

In every instance, they are building strong brands by taking proactive steps to adapt to the times. This is the core concept of progressive branding – socially and commercially. Although social responsibility shouldn’t be ‘branded’ for corporate purposes, companies should keep in mind that, when building strong brands, it will only grow brand loyalty and engagement by appealing to as diverse a range of consumers as possible – especially current customers who may not feel that this is being achieved.

How can football clubs be commercially progressive, building strong brands?

There are different definitions of ‘progressive brand identities’ within football. Explicitly in graphic design, more and more football clubs are updating and modifying their logos to ensure they are compatible with increased digital usage in the age of technology. Brentford and Norwich City’s fresh rebrands in the past few years were carried out primarily for this reason.

‘Norwich City FC has unveiled a new crest for the first time in 50 years, as the football club looks to smooth out accessibility and technical digital issues. The previous Norwich crest…was hand drawn in the 1970s and was the oldest existing badge in the Premier League. Its adoption predated the internet quite significantly, which has led to challenges in the digital era’ – via designweek.co.uk

In Brentford’s case specifically, the club recently announced that it would not be releasing a new kit for the 2022/23 season, in order to be more environmentally sustainable. Coupled with innovative data-focused player recruitment, the Bees are arguably one of football’s most progressive brands.

Football has immense power for change, in both its wealth and its connections to local communities. One has to look no further than Arsenal’s ‘No More Red’ campaign. The campaign centred around raising awareness of the knife crime epidemic ruining lives in London and around the UK, with the Gunners wearing a white kit away at Nottingham Forest in the FA Cup 3rd Round tie in mid-January 2022. Supported by actor Idris Elba, Arsenal proved that a football club can be a strong vector for change within the local community.

When it comes to football clubs’ activity on the pitch, progression is essential. Tactical styles are often increasingly spoken about as ‘brands’ of football. This is true to a large extent; Barcelona’s identity has been forged around tika-taka football. Klopp’s Liverpool are a bold example of a ‘gung-ho’ attacking ‘brand’ of football, and like Brentford, have worked towards more sustainable recruitment practices.

In each instance, these clubs (and others) have been building strong brands on the pitch that, nowadays, most clubs around Europe buy into to some extent. Ten years ago, possession football in the Championship was a rarity. Nowadays, however, direct tactical styles such as the classic ‘4-4-2’ formation are being phased out.

Clubs like Liverpool, Brentford, and others, are building strong brands simultaneously through progression both on and off the pitch.

Norwich have physically ‘progressed’ their own brand identity to streamline commercial operations. In all cases, these clubs are – again – taking proactive steps to adapt and progress based on the current football market.

All of these football clubs have added different angles to their central identities, by utilising different branches of their brands. It’s clear to see that football is a powerful social tool, and can be instrumental in pushing change within society.

When we are building strong brands, we must consider the necessity of constant progression and self improvement. At JAX Branding, we take a holistic look at your brand, and strive to create an identity that is adapted to – and can stand the rigours of – the booming football business marketplace.

But at our core, we remember this:

At JAX Branding, as we make clear in our Football Manifesto, we’re committed to more love and zero hate. Let’s build stronger brands, and let’s do it with meaning.