FIVE FOOTBALL BUSINESS MISTAKES TO AVOID WHEN STARTING A BRAND 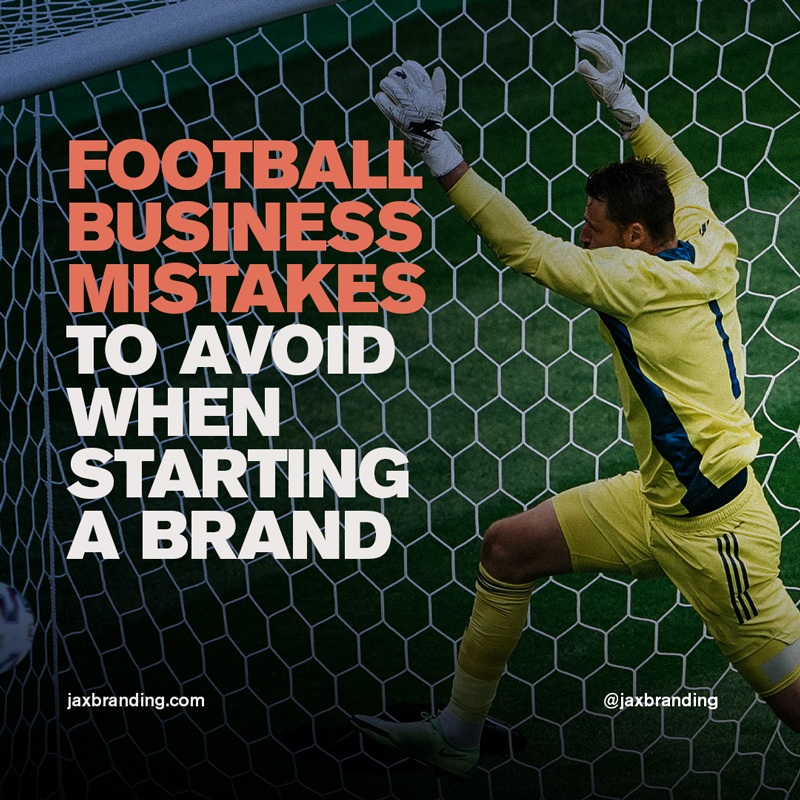 What you’ll learn in this article about football business mistakes:

Starting a business is the pathway of choice for many footballers upon retirement. As we’ve discussed previously in the JAX Branding blog, there’s a lot to know about the best practices when it comes to stepping into the corporate world.

However, one topic that perhaps isn’t covered as often is what not to do. The thing is, there are several ‘correct’ ways to start a business, providing the business is successful. In other words, if things go the way you want and need them to, nobody can say that you’re running your business ‘wrong’.

Several avenues can lead to success in business – intended or otherwise – and, to an extent, the same principle can be applied to football. All it takes is an injury, a shock transfer, a change in manager or one extraordinary substitute appearance and a career can change path almost instantly.

However, there are most certainly a defined set of don’t-dos for footballers going into business. Our list is not exhaustive, but if you avoid these pitfalls then you’ll be in with a much improved chance of keeping your business on track.

People liked the player. Make sure they like the businessman or woman too.

During a career in football, a player can see their identity become synonymous with their game on the pitch. Most footballers lead private lives away from the pitch, which means that – aside from those they are close with – the human behind the jersey often goes amiss in the public image.

However, when a footballer goes into business, it would be a mistake to rely on the identity you’ve forged on the pitch to grow your brand. Footballers have access to resources that most start ups could only dream of, from large social media followings to healthy funding availability. However, a footballer’s business is exposed to exactly the same market factors that their competitors are, too. A footballer’s image will take them so far in the early stages of business, but a key football business mistake is to believe that this will last forever.

To avoid over-reliance on your on-pitch image, it’s a good idea to establish a brand in tune with your personal values, rather than what you represent on the pitch.

As a footballer, your world can become a little enclosed. This isn’t your fault, but it does mean that footballers generally can feel like the main attraction – the big star that everybody looks up to. And, to an extent, this is replicated in the way footballers are able to live their lives.

We’re not naive, and we know that footballers are also vulnerable to a heap of negative attention that is often undeserved or over-the-top. Similarly, we know all too well that, upon retirement or release, there is a real lack of support available at the top level.

However, on a day to day level, it’s fair to say that professional players are privileged. From private flights, nice hotels, good food, incredible wages and, ultimately, fame, a good number of footballers are the centre of attention during their careers. When you go into business, your customer is the centre of attention.

It’s important to remember that your business is reliant on the customer, and a customer’s payments and loyalty will take your brand further than your football reputation ever will be able to. It’s a good idea for footballers to open themselves up when they move into business in the sense of becoming an accessible face of the brand.

This doesn’t mean you’ve got to stage meet and greets, but not replying to inquiries, poorly equipping your sales team, or, for example, causing havoc on social media will rub off badly on your company. If a customer sees you behaving as if you and your business are above them, word will spread. And bad press spreads fast.

Culture is a word that’s thrown about a lot in the corporate world. A key football business mistake is believing that money solves every problem. Head’s up: it doesn’t!

Having money will never harm a business, but cultivating a productive, profitable atmosphere reaches far beyond investment. Footballers starting a business need to remember that, as we discussed in previous points, they are no longer the star. Of course, you will be the most senior official in your company, but nobody likes to work under an aloof leader.

Ensuring that your team’s dynamics are at an optimal level takes time, learning, and experience. This is one area of business that some footballers will be naturally disposed to – learning to lead. However, bear in mind that the requirements and demands of your teammates would have been different to how you will engage with your employees.

Reading on leadership strategies, observing other leaders in your industry, and connecting on a human level with your employees will bring more benefits than simply firing and rehiring when things don’t work.

If your company is experiencing difficulties, look deeper. Your issues might be human, and money won’t solve this.

There are an increasing number of media, marketing, and PR companies popping up – many of which are run by professionals with expertise that could far supersede that of footballers, despite a player’s intimate understanding of a part of the game. The way fans act and interact with the game is entirely different to the way players may understand fans, for example.

Some footballers have gone into clothing, technology, gaming, hospitality, and even bought football clubs themselves. Yet, footballer or not, businesses that don’t differentiate, die. As with the marketing analogy we used earlier, saturation is an obstacle for footballers’ businesses. However, saturation can be overcome with a truly unique product or service.

Our challenge to footballers is this: you’ve got the power to make a difference in the world with your image, reputation, and most likely, money. Why not push the boundaries, go that step further, and do it?

You’d listen to your manager in football, because he knows how to get the best out of you. We know the same, in a business sense. A key part of starting a business as a footballer is humility; there’s a lot to know, and a lot to learn, that footballers simply won’t have been exposed to before in their career.

Asking for help and valuing self-development is integral to creating a business that will be able to avoid the common football business mistakes that we’ve listed above. Venture outside of your circle, reach out to experts, and get a coffee to begin talking!

At JAX Branding, we offer more than just branding. We view ourselves as advisory partners, supporting footballers in business discovery, creating powerful brands, and ensuring that – from get go to goodbye – we help put your brand in pole position to grow and succeed.