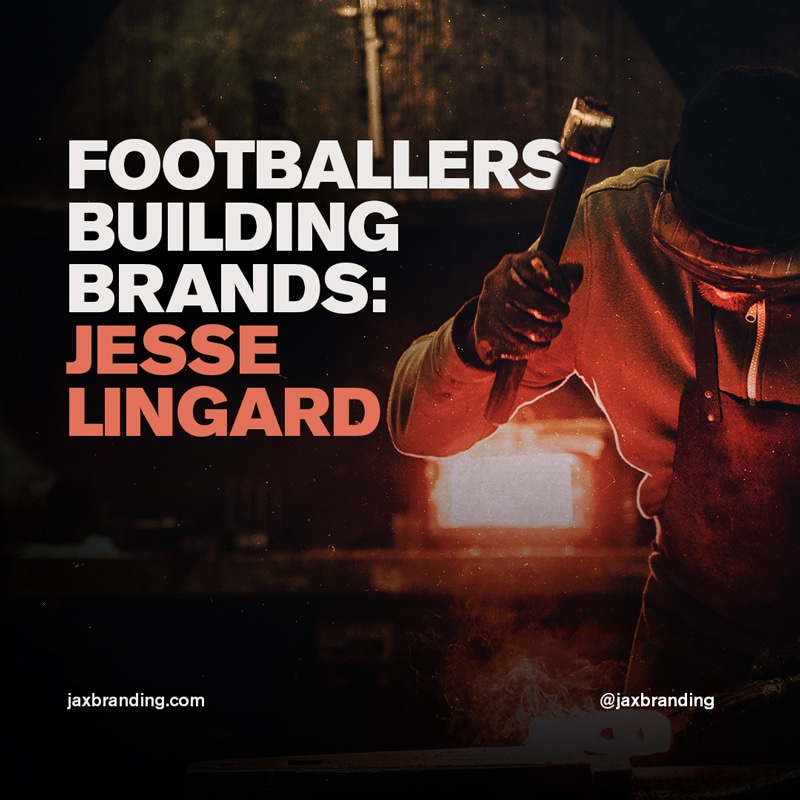 On-loan West Ham winger Jesse Lingard hasn’t had the easiest time on the pitch in recent years, but he’s been very busy off it…

After a difficult few seasons at parent club Manchester United, sparks of brilliance since he joined the Hammers have thrusted Lingard back into the limelight both in the Premier League and on the international stage. Jesse Lingard has recently been called up to Gareth Southgate’s latest England squad for the March internationals, which should see him don the Three Lions’ shirt for the first time since 2019.

And, off the pitch, Lingard has equally big ambitions.

It’s common to see footballers building brands nowadays more than ever, but it’s easier said than done. Whilst Premier League salaries can help with the financial aspect of building a brand, and the social reach that players have likewise, there is no guarantee that people will necessarily take to a certain product or service.

As such, it’s always good to get specialist branding advice to help a brand reach the next level of tailored personality, making it as professional as possible.

Jesse Lingard, who owns the fashion labels JLingz and Be Yourself, has come under staunch criticism in recent years over both his performances on the pitch and his business endeavours off it. Roy Keane and Paul Ince were both fairly strong in their criticism of Lingard’s entrepreneurial ventures, but such negativity hasn’t deterred the on-loan West Ham attacking midfielder.

‘JLingz’, which Lingard established in the summer of 2018, makes its target audience clear from the minute that a lead steps onto the website or one of the brand’s social media outlets. The JLingz website is simple, sleek and immediately shouts ‘youthful and trendy’, but also exclusive, in some ways. Be Yourself has a similar feel – a trendy range of clothing appealing to several different styles – with a contemporary outlook.

JLingz, especially, played on the idea of ‘being in the now’. The logo was based off Lingard’s own trademark celebration. After an eye-catching 2017/18 season, Lingard’s popularity rocketed – amongst youth, especially, given his brand ‘cool’ connotations – something very important when branding for young people!

Lingard harnessed this, using his newfound popularity and subsequent huge social media following (with some 6.8 million followers on Instagram, Lingard is ‘bigger’ than Bruno Fernandes, Jordan Henderson and several more of the Premier League’s best players on the social media platform) to platform JLingz.

The idea of ‘Being Yourself’, meanwhile, is something that Lingard has had to harness throughout his footballing career. With Manchester United stagnating in the Premier League and Lingard finding himself in and out of the team in the 18/19 and 19/20 seasons, the Englishman found himself somewhat froze out of the Red Devils’ squad for the 2020/21 campaign. Even his non-footballing activities managed to come under criticism; it’s fair to say that Lingard wasn’t having the best time of it, at all.

Footballers building brands are sometimes criticised for not ‘focusing on the football’. In reality, they’re wise enough to know that a football career doesn’t last forever…

Today, true individuality is hard to come by. People are bothered about how they compare with their friends or colleagues. The rise of social media has made life a competition of views, likes and shares in many ways. Jesse Lingard’s ‘Be Yourself’ brand champions the idea of, as it says on the tin, being yourself.

Being more than ‘just a footballer’ is something dear to Lingard’s heart. He donated of the money raised from his JLingz event in 2019 to charity and supported the NHS by donating profits from his JLingz masks to them. Much of this went under the radar, but Jesse was, so to speak, being charitable before it was cool.

There was more to him than solely his on-field performances.

Lingard is keen to push this mantra – one that is emblazoned on the label’s website.

Footballers come in for unprecedented levels of criticism and, sadly, abuse in the modern-day game. In such a result driven industry, the credibility of footballers building brands is constantly cross-examined against their performances on the pitch. But perhaps it’s time to start valuing the person and the values they encompass – in the business world, especially.

Fashion strikes a certain chord in society. People make statements through fashion. People express themselves through fashion. Some may even argue that what people wear gives an accurate representation of their personality.

Whether true or not, it’s important to, simply, keep things real. In a world where you can be a million things, don’t forget to Be Yourself.