THE ORIGINS OF THE MOST ICONIC SPORTS BRANDS OF ALL TIME 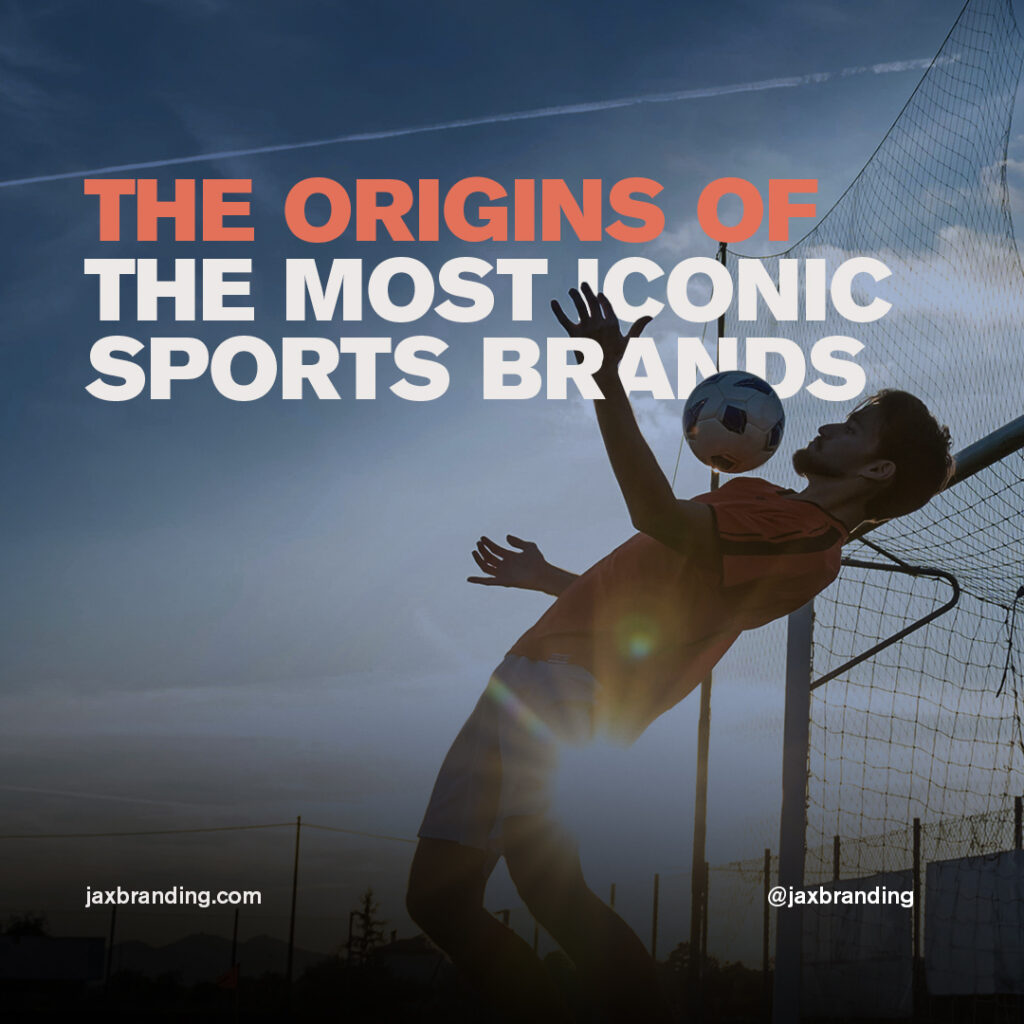 Sporting heavyweights Nike, Adidas and Puma all have fascinatingly unique histories (but also a lot of crossovers in the case of the latter two). Where did their iconic branding originate from?

The Nike swoosh. Adidas’s three stripes. Puma’s leaping puma. These three symbols have visualised the most iconic sports brands of the last 70 years. Their branding has created unique, unchallengeable identities that have survived the everchanging sports apparel marketplaces. Nike, Adidas and Puma have led the way in performance clothing innovation across the 20th and 21st centuries.

At JAX Branding, we love iconic sports brands. They serve as the cornerstone for all the work a sports branding agency does. Yes, we bring a personal, distinctive identity to each and every brand that we passionately develop, but the power that the ‘big three’ hold in the sporting sector is supreme. And leaders, generally, are to be learned from.

Iconic sports brands create emotional attachment. They bring joy to millions and play an integral role in the wider sports market – especially in football. Most footballers today wear either Nike or Adidas boots, and Puma is increasingly becoming the goalkeeper glove brand of choice for the pros. As such, they are associated with some of the greatest moments from the beautiful game.

But all brands have their roots somewhere much further back in the past. Where does branding actually originate from?

The world’s most iconic sports brands all have their roots in the weird and wonderful history of branding.

We have to go back to the times of the Vikings to unravel the roots of branding. In history, ‘branding’ had a very practical purpose – but also some rather torturous uses. Ancient Norse language provides the origin for the word ‘brand’, from the stem ‘brandr’ which literally means ‘burn’. From ancient settlements to the early modern period, livestock was branded with a hot iron by farmers to mark their property. Farm animals are still ‘branded’ today, but with paint instead of hot iron.

Branding was also used as a particularly barbaric form of punishment. From the Witch Craze of the 17th Century to Slavery in the 19th Century, the hot iron was used in merciless practices. From 1645-47, ‘Witch Finder General’ Matthew Hopkins had around 200 women burned at the stake in England for allegedly being witches, and many were identified by the ‘witches mark’. These consisted of moles, skin tags and birthmarks that were believed to be caused by the Devil’s hot iron.

In all its uses, branding meant, and means to this day, leaving a mark. In a business sense, the word ‘branding’ began to come into widespread use in the 20th century. However, branding – in terms of differentiating goods by print – came into force upon the invention of the Gutenberg Printing Press (c1440). Slogans began to appear in newspaper advertisements in the 1600s and 1700s.

Trademarks, typewriters, and mass production came with the Industrial Revolution of the Georgian and Victorian Eras.

Newspaper advertising was the most popular form of raising awareness of goods and services, and logos – or at least image-based differentiators – began to come into play. Businesses were also packaging with more care and began to develop ‘identities’. The introduction of the trademark in the 1870s was a key factor behind this.

The boom and bust of the post-War Jazz Age was next to come. Just think of The Great Gatsby; grandeur and luxury were in full supply, especially in the United States. Industry boomed, and, although unstable, looked as if it could only go one way – up. The introduction of film made advertising visible, and as the century progressed post-depression, an emphasis on graphic design became prominent.

Radio and television played crucial roles in branding before the introduction of the internet. Slogans and catchy jingles were the promotion methods of choice. Naturally, packaging, posters and billboards continued to play vital roles in creating a brand identity. The internet age has revolutionised branding and brought with it the rise of websites – perhaps the most important part of branding a business well in the modern day.

It is indeed true that Adidas and Puma are technically the same company, split down the middle. Brothers Adolf and Rudolf Dassler established the brand under the name ‘Dassler Brothers Shoe Factory’ in 1924. Their first logo comprised a shield, with the word ‘Dassler’ running just above it. A shoe was held by an eagle and was used from 1924-1949, with an unsurprising but unsettlingly uncanny likeness to that of the Nazi Party.

In 1949, a rift in the family saw Rudolf split from his brother’s business and establish another of the world’s most iconic sports brands, Puma (initially ‘Ruda’). It wasn’t until Rudolf’s death in 1974 that the brand began to globalise; under Rudolf, it remained very much a small business within Germany alone.

In 1952, Adi (now solely running the brothers’ business renamed as ‘Adidas’) purchased the rights to the three-stripe logo we all know and love from Finnish sports company Karhu Sports. However, it wasn’t until 1967 that the three stripes would come into force. In 1971, Adidas developed the ‘trefoil’ logo, now more commonly associated with the Adidas Originals collection. It is meant to represent diversity, with each of the three points connoting each of the continents Adidas sold in at the time.

The logo was revived in 1997, and the new slanted striped logo was introduced only a few years earlier in 1991. To this day, Adidas use a collection of logos, from the original ‘trefoil’ to, simply, the words ‘Adidas’. Adidas create continuity in the brand and harness several generations of buyers by having variations of their brand identity to appeal to as wide a demographic as possible. Adidas’s branding success as one of the most iconic sports brands of all time is a key reason for their commercial success.

You can’t talk about iconic sports brands without talking about the market leader, Nike.

Nike is the ultimate American brand in many ways. Founded as Blue Ribbon Sports in 1964 by University of Oregon track and field coach Bill Bowerman, the company has grown to become the most recognisable sporting outlet of the 21st Century.

Synonymous with innovation, Bowerman and his associate Phil Knight strove to create better, faster and more agile shoes. Their mission has undoubtedly been achieved, but Nike’s incredible growth has been pushed by their unique, inspirational branding. After all, who doesn’t recognise the Nike Swoosh and the ‘Just Do It’ slogan?

Renamed ‘Nike’ in 1971, the company inaugurated the Swoosh logo. Funnily enough, it was designed by Portland State University student Carolyn Davidson for a rumoured $35. Apparently, Phil Knight wasn’t taken by the logo at first, but said that ‘it will grow on me’. Before the Swoosh, Blue Ribbon had been importing shoes from a Japanese retailer and was thus using their tiger-based logo – the ‘Onitsuka Tiger’.

Perhaps the most ingenious part of Nike’s advertising was its brand associations. The growing retailer used excellent celebrity endorsements, firstly Olympic runner Steve Prefontaine, to help market its services. The World Cup-winning Brazilian football team of 1994 heavily endorsed Nike, as well as the Back to the Future film series.

And in 1987, one of the most iconic sports brands logos arrived on the scene; ‘Just Do It’.

Appealing to the everyday jogger, the Olympic athlete and the casual sportsman, Just Do It implies determination. Drive. Overcoming the odds. Breaking the barriers. It’s more than a tagline. It’s Nike’s brand identity in a nutshell. It intrinsically links to Nike’s mission statement:

‘To bring inspiration and innovation to every athlete* in the world’ – ‘*if you have a body, you are an athlete’.