SALFORD CITY: HOW TO REBRAND A FOOTBALL CLUB 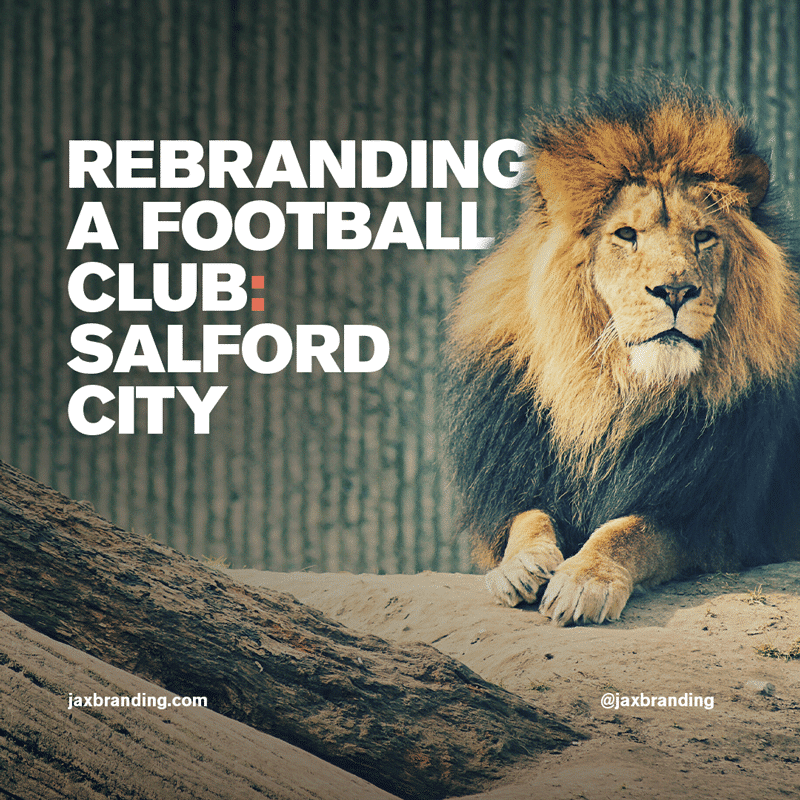 When Gary and Phil Neville, Nicky Butt, Paul Scholes and Ryan Giggs took over Manchester-based side Salford City in 2014. The club was given a new lease of life.

The ‘Class of 92’ were a group of Manchester United players brought through into the first team by the legendary Sir Alex Ferguson during the 1990s. These include the aforementioned five, alongside David Beckham, Keith Gillespie and Wes Brown, to name a few.

The Class of 92 are mostly retired now. But many of them have made the transition into the business world – Neville and Co included – and their ventures range from hotels to cafes to perfume and even underwear. But the most intriguing, and perhaps the most rewarding, avenue that five (six, if you include the 10% stake that Beckham purchased in 2019) pursued, is that of Salford City Football Club.

Since the five original investors (Neville, Neville, Butt, Scholes and Giggs) teamed up with Singapore billionaire Peter Lim to buy Salford City in 2014, the club have achieved three promotions in seven years. The club turned professional in 2017 and are now an established League Two side. Ryan Giggs set a fifteen-year target to achieve Championship football, and broadly speaking, Salford City appear to be on this trajectory.

What can we learn from Salford City about rebranding a football club?

When the ‘Class of 92’ first purchased Salford City, there were rumours – and subsequent fan discontent – about the kit colour being changed from tangerine orange to red. The Class of 92, wisely or not, went a little bit further and completely rebranded the club.

At the time, this may not have seemed like a particularly smart move. Salford City’s fan base was already limited in relation to the area’s other teams (Stockport County, Manchester United Manchester City and, more directly, FC United of Manchester, Curzon Ashton and Darlington). One would have thought that the Class of 92 should have tried their best to unite the fans under a common cause. But, in hindsight, a fresh new approach was quite literally a fresh new approach – and one for the better.

Rebranding a football club is no mean feat, but Salford City’s brief made its aims clear from the get-go. The Class of 92 said:

‘The heritage of the club and the city itself had to be acknowledged in the new design, and be infused with the ethos of no-nonsense, honest, hardworking football, married with the ambition of the Champions League-winning new owners’.

Non-League football is the heart of a community.

It may be a million miles away from the riches of the Premier League, the acclaim of playing at 75,000-seater stadia, the extensive, obsessive media coverage of footballers’ lives and the celebrity culture that feeds the stardom of being a footballer.

However, the non-league game is a pillar of local, community, personal football. The fans know the players and the players know the fans. Similarly, the stakeholders tend to have a more direct influence over the direction that a club heads in. Hence, it was important for Salford City to retain a sense of identity and belonging in their rebrand.

So, what did they do?

Rebranding a football club on Salford’s scale presents a problem. The Class of 92 wanted complete and utter change, rather than tweaks. The bigger the project, the wider the range of ideas one has to work with. It was important that Salford City maintained a clear, cohesive brand identity throughout their work.

It can be difficult to measure the effectiveness of a rebrand quantitively. But Salford City’s progression throughout the footballing pyramid has shown the Class of 92’s investment to be paying off. The new branding and defined, forward thinking identity is undoubtedly a part of that.

Even the floodlights are shaped in the style of the club badge!

The Class of 92 have platformed their football club using their established, global brand: their names.

Salford City are lucky in some ways. The Class of 92 could have invested in any non-league club in the country and said club would likely be where Salford are now. On the pitch, Salford City have been aided by investment (which is only natural), but it’s commercially where the Class of 92’s pulling power exists.

Salford’s BBC One documentary ‘Class of 92: Out of the League’ immediately raised the club’s profile; an impressive marketing opportunity for the club. The Class of 92’s reputation has given Salford City a somewhat global appeal, boasting some 163,000 followers on Twitter – more than any League Two club and most League One teams!

Attendances are also up at Salford’s stadium, which has been expanded to 5000 seats. And, although it wasn’t necessarily that Giggs and Co produced extensive advertising of the club themselves, any ‘big name’ taking over a football club produces a sense of intrigue – something invaluable in branding.

To grow a business, you need people to start taking an interest in it. To start asking questions. JAX Branding will help your business attract intrigue.