BUILDING A BRAND: THE IMPORTANCE OF DECISION MAKING 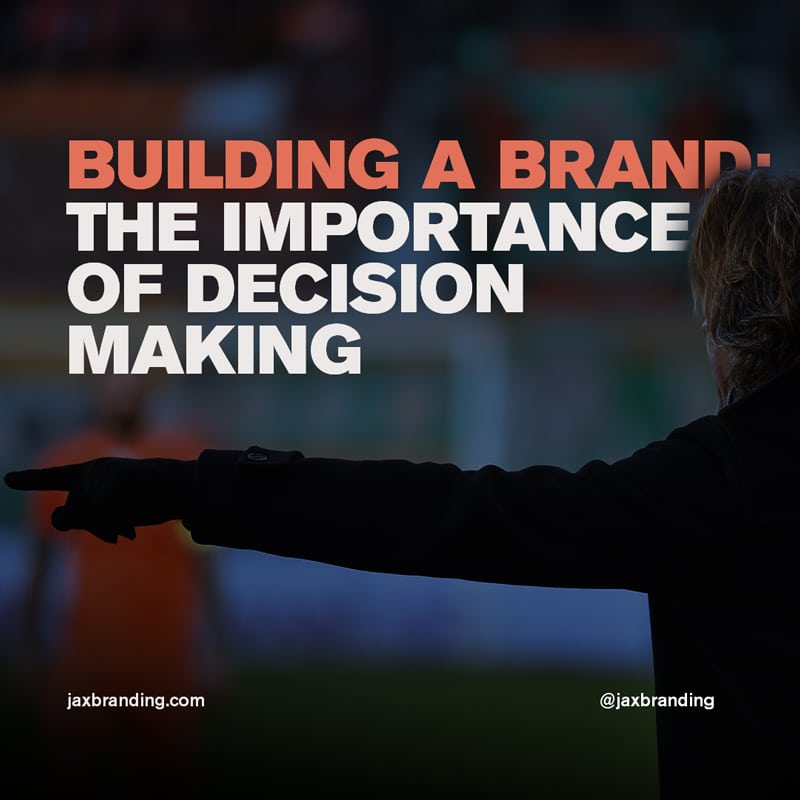 Gareth Southgate’s announcement of England’s Euro 2021 squad was a perfect example of the difficult decisions leaders have to make – and perhaps don’t always get right. But what transfers can we apply to branding?

Building a brand is a difficult thing to do. It takes creativity, clarity and cohesive thinking to even be in a place where a branding agency can begin to build something for you. Although, at JAX Branding, we help guide you in the creative process to ensure we’re building beloved brands on the same page, an initial, clear idea at least is helpful.

In business, clarity stems from being able to make tough decisions. Decision making is an integral part of creating a successful business, and, given branding is a huge part of business, decision making comes into play here, too.

But what does this have to do with Gareth Southgate and the announcement of England’s EURO 2021 squad? Well, building a brand is similar to building a football team in the respect that difficult decisions must be made. We may have lots of different ideas of what we want to portray and how we want to do it, but only one can be chosen to create a unified brand identity.

Many assumed that Southgate would cut one of the right backs from the finals squad. After all, taking four players where only one can play would have been a rather strange use of squad places.

However, instead of making a tough decision, he simply took all four right backs. If it hadn’t been for Alexander-Arnold’s unfortunate injury in the warmup game on Wednesday 2nd June vs Austria, Southgate would have then had to disappoint three of them.

Whether the England manager has got his squad selection right or wrong, we won’t know until the tournament’s conclusion or England’s exit. Yet, some may argue it was a bad decision – one where Southgate has taken the ‘easy’ way out.

When building a brand and in business generally, we want things to be streamlined and cohesive. When we ‘overload’ ideas, or try to please everybody, things often become a lot slower and a lot more frustrating, actually having an opposite effect to the positive one we intended.

Timing is especially important. In football, timing isn’t something that can always be controlled. Sport can be circumstantial and things like having certain players available often falls to luck. However, timing is perhaps something that can be dictated more so by a businessperson who is making their own decisions.

Are you entering your brand into the market at the right time? Is it clashing with another start up? Are you properly differentiating from the current competition?

A key element of building a brand often comes when the venture is established. The infamous rebrand, where timing is imperative, has thrown up some horror stories.

Rebranding is the Achilles heel of a business. It’s an aspect of building a brand that can truly make or break a business. Rebranding can often cause a red face for the poor company spokesperson that has to face the press and explain what, when done badly, can be quite embarrassing.

There are usually two factors in bad rebrands. Firstly, the business didn’t need to rebrand (i.e. their timing was wrong). Secondly, the business tries to change its identity too drastically. It’s the former that we want to focus on in this article.

Take a look at this quote:

‘A good reason to change a logo is that it’s not doing the job you want it to do—and because a simpler, more distinctive evolution of it could do that job better. And the important thing about being a brand is that whenever people see you in the wild, they should recognize that it’s you’

Some rebrands simply seem like they’re done for the sake of ‘freshness’. Some businesses rebrand and it quickly becomes apparent that they, simply, didn’t need to. Football rebrands such as that of Leeds United in 2018 or the Spanish football logo saga exemplify the negative reaction that unnecessary rebranding can bring.

As Slack points out, rebrands should only be undertaken when there is a clear reason to do so.

This is where decision making comes to the forefront of building a brand. Such decisions need to be founded and fully believed in, often backed up by statistics and customer research. Similar decisions need to be taken to ensure continuity in brand identity. Take the Gap rebrand of 2010; the company went from trendy clothing retailer to washing machine building firm.

Tough decisions in business can come about when building a brand. These decisions need to be thought about, properly planned and evaluated in terms of both pros and cons. Trying to fix problems by essentially trying to do everything to please everyone, as arguably occurred in the case of Gareth Southgate and the England squad, isn’t going to achieve desirable results.

Making tough branding decisions should always be done with an expert by your side. JAX Branding is here to help. Want to kick off your business career? Chat with Jack about your vision, and get the ball rolling.