HOW TO START A BUSINESS AS A FOOTBALLER 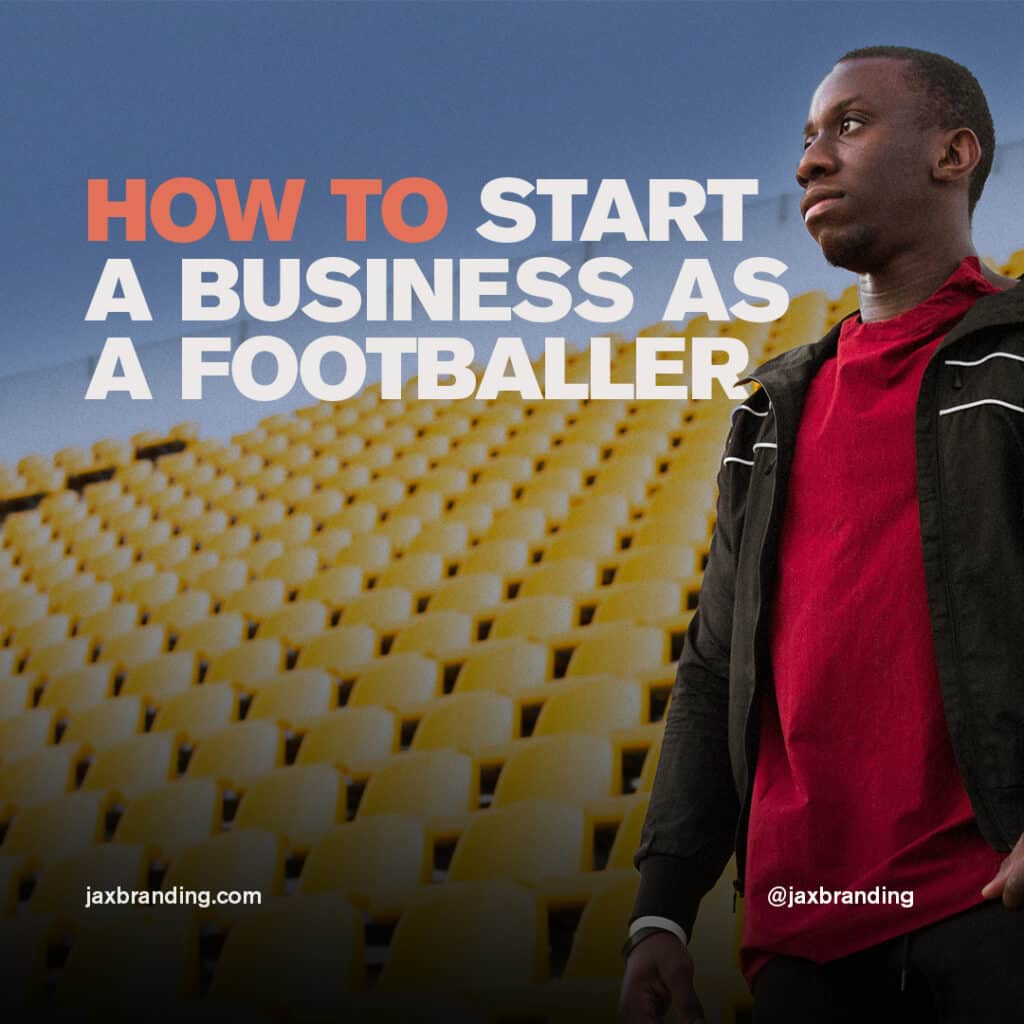 The all-you-need to know guide about how to start a business as a footballer, former or current, presented to you by JAX Branding.

• Different types of company in the UK

• How to build a complete brand as a footballer

• Useful tips on setting up your business after football

How to start a business as a footballer. It’s a big question. One that seems slightly daunting to approach. The word ‘business’ seems gargantuan, immediately concocting images of boardroom meetings, skyscrapers, million-dollar contracts and a contact list akin to the most recent Fortune500. Yet, even for the most ambitious individual, starting a business as a footballer isn’t necessarily a quick fix for a speedy cash injection.

No. Business, for footballers as much as anyone, is a journey. And, we’re not saying that in a wishy-washy, unfounded inspirationally quote-y way, but with as much truth as we can put behind it.

Footballers likely enjoy clear advantages when starting a business, such as access to healthy start-up funds and existing fan base, but this doesn’t distract from the fulfilling feeling of accomplishing something – or perhaps something more.

However, footballers, both past and present, are all too often put off starting a business. Why? Because footballers are constantly under scrutiny. Once a footballer and the news media catch each other’s eye, a chemically unbreakable bond in the language of sensationalist headlines and shallow scoops is formed.

Footballers can feel like they’ll be judged for having interests away from the game. Others have innovative and scalable ideas hidden in the back of their detail oriented, analytical minds, but simply don’t know where to start.

We’re going to change that.

In this guide, you’ll be introduced to the practical and holistic need-to-knows when starting a business as a footballer. From the administrative side to the bold, beautiful, brand-y side, we’ve covered it.

And not only have we covered it, but we’ve done it. Our advice (cue copywriting cliché – but it’s true) is entirely tried and tested. Not only in the process of building JAX Branding, but for other ambitious, forward-thinking individuals who have a point to prove and a dream to reach.

The power of ‘and’ – you can be a footballer, and more.

Footballers can be entrepreneurs. The idea that players should only focus on the game doesn’t necessarily hold true in the twenty-first century.

Of course, footballers are in a profession that seems only a pipeline dream for most of the people that sit in the stands watching them week in, week out. When players seem distracted from the task at hand – one that most are being paid millions of pounds to do – it is natural that fans and the media take exception to whatever it may be that they’re doing away from football.

After all, footballers are in a privileged position when it comes to their salary, status, and the fact that the majority are doing something they love every day of the week.

But this doesn’t mean that footballers aren’t allowed to have other interests. A footballing career is perhaps a fifth of the length of an ‘ordinary’ white collar position, meaning that footballers’ financial situations – more often than is reported by the media – can become difficult at best and destitute at worse in retirement.

The average retirement age of a footballer is 35.

In this time, many do accrue a substantial amount of wealth, but society’s expectations for footballers remain cemented in the view that players are simply at the mercy of the fans and are robots for entertainment. Clubs focus on profits, and the human in the footballer is left behind.

Football has got to switch its thinking. Players’ salaries are what they are. They are a by-product of the immense riches in the industry. As such, thinking can be short term. After all, when you’re earning well over £1,000,000/year in many cases, money isn’t the first thing on your mind.

But footballers need to start thinking long term. An expensive lifestyle coupled with one or two financial errors can see a few million pounds worth of savings evaporate within ten years of retirement. Business as a footballer is an avenue that doesn’t need to clash with on-field commitments, contrary to popular belief.

Instead of being burdened with the choice ‘footballer or entrepreneur’, visionary players liberate themselves with the ‘power of and’. This is the ability to embrace several dimensions at the same time.

Instead of choosing between A OR B, these players figure out a way to be both footballer AND an entrepreneur. But how does this work in reality?

What are your options when starting a business as a footballer?

When it comes to the ‘Power of AND’, footballers should remember that they are in a unique position compared to other entrepreneurs. Business as a footballer is often less of a financial risk.

Without sounding naïve, most players do have the resources to finance an operation where they have the luxury of choosing as much or as little work as they’d like to practically do on a day-to-day basis. Whereas many start-ups are the proverbial ‘one man band’ until they become profitable, many footballers will likely be in the position where they can hire staff to carry out daily responsibilities.

But before a footballer even reaches the stage of hiring staff, they need to set up a business. It is here that we reach the first stage of our actionable advice: how to literally start a business as a footballer.

There are four main types of company in the UK. These are:

A Public Limited Company is owned by its shareholders, who all have limited liability. This means that, should the business go bankrupt, the only fee that will have to be paid out is the total value of its reserve. As such, the individual shareholder’s possessions will not be at risk. PLCs are the UK equivalent of an American Inc. or Corporation.

The reason that virtually all those starting a business as a footballer will not be setting up a Public Limited Company is that it is financially challenging, requires experienced and reliable market prediction capabilities, the company will need to publish public financial reports, and need a reputable market standing which a start-up, in its nature, doesn’t tend to have.

Similarly, the types of private companies limited by guarantee tend to be charities, schools, student unions, societies, and social enterprises. These types of company are usually set up where trading is undertaken (goods or services are bought and sold) but the company isn’t necessarily for-profit.

Footballers becoming entrepreneurs will likely be creating businesses for-profit. The two most appropriate types of company when going into business as a footballer are becoming a Sole Trader or starting a Private Limited Company.

A Sole Trader is as it says in the name. You will be trading solely (alone). This means that you are the sole owner of the business. This type of company is much easier to set up than a private limited company. However, you are essentially the business meaning that if things go wrong, you will be entirely liable for the debts of the business.

Starting a business as a footballer can also be done in the form of setting up a Private Limited Company. The company is owned by shares issued privately to chosen shareholders. These shareholders have limited liability; they will only be liable to pay up to the total amount of the reserve of the business should the company file for bankruptcy.

What’s the difference between a business and a brand?

Starting a business as a footballer means more than filing details with the government and parting with hard-earned cash to finance the beginning of this exciting new journey. Your business is the administrative part of something much bigger – a ‘brand’ with a purpose behind it.

In essence, your business is the organisation that makes up the ‘frame’ or the ‘infrastructure’ of the company. Your brand is the image and identity that the business portrays. Take Nike, for example. Nike, as a business, is the money it receives and pays out, the listing on the stock market, the staff it employs, and the stores that it owns. The brand is the ‘Swoosh’, the black and white colour palette, the ‘Just Do It’ slogan, and the design of their website.

So, how does an entrepreneurial footballer create a powerful brand?

Every successful person starts off with a vision. They then work out how they’re going to set off on a journey that will achieve this vision. They have to set some objectives, be results orientated, put realistic goals in place, and then create procedures to achieve these goals.

Footballers becoming entrepreneurs need a powerful brand in place to help them do this. Brands create the human connection necessary between business and consumer to make the buying process more palatable and attractive.

A brand has a practical part and a holistic part – a brand strategy, and a brand expression.

The brand expression will include:

Peter Jones’s formula for success is:

They say that, if you don’t have a vision, you don’t know where you’re going. This is particularly true in branding which is, largely, a visual process. However, at JAX Branding, we’ve found a different formula that helps with goal setting – in branding and in business for footballers generally.

When starting a business as a footballer – and especially when it comes to branding – goal setting is a part of the planning process that, although often overlooked, is particularly important when it comes to ensuring productivity. This is because productivity is largely a psychological process.

So, how JAX Branding can help you with this?

Therefore, at JAX Branding, we’ve created a workshop that works wholly on opening up the brain to set effective goals. This workshop is tailor made for footballers and works on psychological principles to ensure that the advice we give you is founded in science.

JAX Branding isn’t yet the complete business. No business is. However, we want to take you on our journey – and support you in yours simultaneously. That’s the great thing about business. Everyone can win. And when everyone wins, we know we’re doing meaningful things that make a difference, every day.

There’s no time like the present. Take action, take control, and take your off-pitch career forward to create a business as a footballer that even the pundits will love!