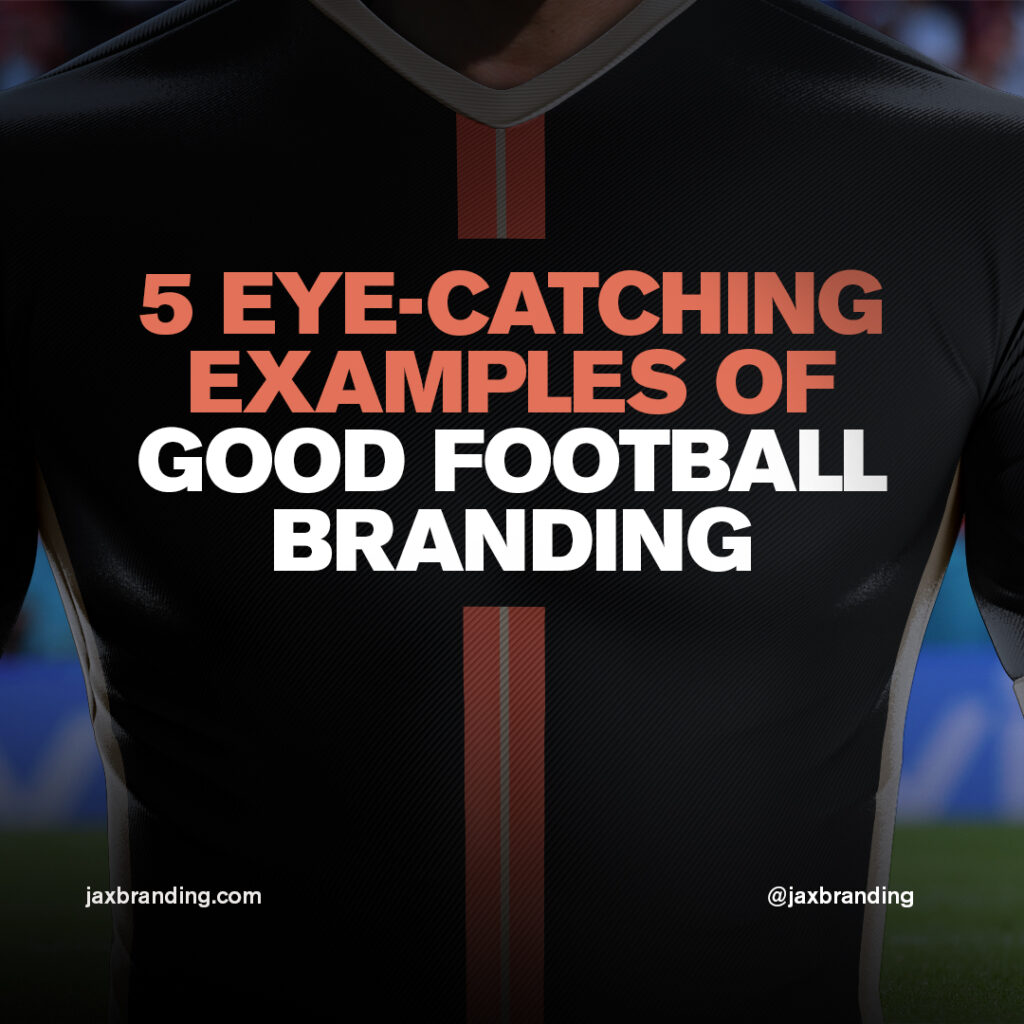 The best businesses have the boldest brands. Here are seven footballing organisations that got things spot on…

Football is our beautiful game, but one can’t deny its commercial value. With the immense amount of money that has been poured into European football especially in the last 20 years, football clubs are as much businesses as they are sporting entities. And business means brands that sport examples of good football branding, bad football branding, and everything in between.

Here at JAX Branding, we specialise in helping footballers, agents, and others in the sporting arena brand their businesses. Good football branding is what we live and breathe (figuratively speaking). As an agency and as individuals, we pride ourselves on not only creating beautiful brands, but also in supporting players in their entire transition between football and business.

To get your business brain rolling, here are five examples of good football branding that you can use to inspire your own corporate vision.

Our list of five great examples of good football branding doesn’t start with the dizzying heights of the World Cup or Premier League. Oh, no. We’re starting at the bottom (albeit not literally), with English National League club Eastleigh FC. Based just outside the city of Southampton, Eastleigh rebranded in 2020 and the development of the club’s identity was well received by fans.

Unlike unsuccessful club rebrands, the history of Eastleigh as a town and a club was at the forefront of this rebrand. Undertaken by Football Club branding expert Christopher Payne, the rebrand incorporated the iconic Spitfire (after the club’s nickname – the Spitfire first flew from the Eastleigh aerodrome) as its focal point and held true to the roots of the club.

The new logo was both minimalistic and intricate; minimalistic in its shape but intricate in the finer details of the Spitfire graphic. A perfect example of good football branding, Eastleigh marketed the rebrand as #ANewChapter for the club, proving that football clubs can step into the future and continue to hold their past dear.

FC Barcelona appear to be a club in freefall. Both on and off the pitch, the Nou Camp has become a stagnant symbol of a football club who are clutching onto a glorious past, but the ropes on which they hang are slowly rotting. Yet, if anything good has come out of the Catalan giants’ season so far, it was the release of their third kit.

Good football branding incorporates senses of community and belonging. Its imagery and design should invoke feelings of pride, rapport, and a closeness to the heart. Barcelona turned to local young artists to reimagine the iconic claret red and blue stripes of their kit, with those who designed the kit keeping city landmarks and the history of Barcelona as a club at the crux of their creation.

Reimagined silhouettes of Barcelona city landmarks were reimagined as silhouettes. Each of the city’s five districts is also graphically interpreted. These are Poble-sec, Poble Nou, Gràcia, Raval and Les Corts. The strip was marketed under the tagline ‘Created BY Barcelona’.

Cristiano Ronaldo is as much business heavyweight as he is footballing superstar. The incredible Manchester United winger is one of the beautiful game’s richest stars, his commercial interests off the pitch creating a significant portion of this wealth. Ronaldo is an excellent example of good football branding, but more so, good personal branding.

Footballers are in a unique position when it comes to branding. They, as celebrities, are brandable assets – for better or for worse. Ronaldo has utilised his huge platform across social media and image as more than a footballer to create a powerful brand.

The Portuguese superstar has managed to use his ‘ultimate spornosexual’ image – sometimes interpreted as arrogant or egoistical – in a way that furthers his own commercial activities in clothing, health, and perfumery. In simple terms, Ronaldo fits his brand’s image, because he is its image. He has successfully crossed his footballing status (the iconic ‘7’ shirt) with his corporate interests – to create a mega brand that appeals to a diverse demographic.

Brentford aren’t traditionally one of London’s biggest clubs, but the Bees’ rapid rise through the English game brought with it a sleeky club rebrand in September 2020. Combined with a move to a new stadium and a to-be promotion to the Premier League, Brentford’s new branding personified a club moving into an exciting future.

The previous club badge was a typical, traditional club ‘crest’ which was impractical to use. With the increasing digitalisation of good football branding, simplicity is key. Minimalism, purpose and meaning were key to Brentford’s rebrand, and the new logo was a simple, circular crest with a clean bee graphic in the center. The typography of the new brand was changed from serif to sans serif, modernising the brand’s feel. Interestingly, said typography was inspired by the stinger at the end of a bee’s tail, with sharp flourishes at the end of lettering not particularly noticeable but differentiating and unique enough to be worthwhile.

Like Eastleigh, Brentford ensured proper communication with stakeholders in the club. Designers used previous badges as key reference points to create the new logo. Under manager Thomas Frank and owner Matthew Benham, Brentford have become pioneers of a new, progressive footballing model on and off the pitch – taking several bold decisions in the process – and have thus far proven successful with their good football branding and excellent results on the pitch.

The City Football Group epitomise good football branding in the sense of cohesiveness and standardisation. The best brands in the world are consistent in their efforts, across the corporate realm. This begins with a strong, identifiable brand identity.

The multiple clubs that come under the City Football Group (the company that owns Manchester City) also owns several other teams around the world. The business model is controversial, but their branding trick is ingenious. Melbourne City FC, New York City FC, Manchester City FC, and Montevideo City Torque all have similar looking badges, similar looking kits, and even similar names.

CFG did this on purpose. By using Man City’s reputable brand image, fans subconsciously link each less reputable team back to Man City themselves. Brand consistency maximises Manchester City’s reputation. Each team in the CFG benefits from City’s reputation, in turn. This is because they fit City’s look and feel which people associate with the club’s status and success.