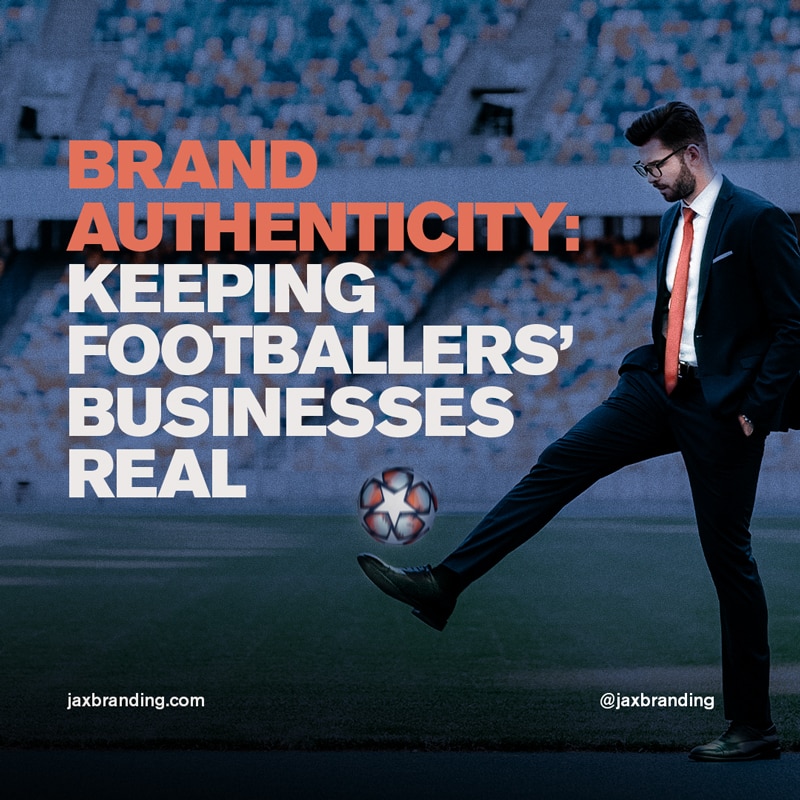 How can we separate the person and the mission from the image of the ‘star’ when branding footballers’ businesses?

What you’ll learn in this article:

• What brand authenticity is

• The 4 key principles of brand authenticity

• Why brand authenticity is important for footballers starting businesses

• How to keep a footballer’s brand authentic

Brand authenticity is something that is vital when it comes to a start-up. New businesses need to grow a reputation, but with limited resources and potentially a lack of corporate experience, this can be difficult.

Sometimes, new brands try to be something they’re not in an attempt to grow quickly. This can lead to corner cutting and, sometimes, a lack of genuineness. That’s not to say that new brands are misleading or attempting to deceive, but in the pursuit of growth, patience can wear thin.

Brand authenticity is something that is especially important for footballers starting businesses to remember. Being a professional footballer brings with it star quality and differing degrees of celebrity life. With this, it can be difficult to be ‘authentic’.

This isn’t a criticism – having an identity in the public eye can quickly fuse into a personal identity. It can be difficult to personally distinguish between the two. As such, when footballers go into business, it’s important to define the image behind the brand. Is it the footballer, or the person?

There are pros and cons to both, and neither is definitively the ‘right’ answer. It’s entirely up to the individual as to how they portray their image through their brand.

However, in an age where consumers are becoming ever more closely intertwined with a business, consistency is paramount. The modern business is transparent – through choice or otherwise – and consumers can sense the smallest of changes in brand approach and tone. When this happens, it can create confusion, a lack of trust, and a loss of reputation.

So, how should footballers going into business go about creating brand authenticity?

The principles of brand authenticity

Brand authenticity is defined as how a consumer perceives a brand to be faithful to itself.

There are four key principles of brand authenticity, according to InfluencerMarketingHub, which are:

But why is it important for a brand to be authentic?

Today, consumers buy into brands more than ever before. Longer term relationships are forged through marketing tools such as newsletters and other sign-up assets. Communications are becoming more personalised, loyalty schemes widened, and brand identities forged around evolving values.

And, as society begins to move faster and faster in terms of its ideals, ‘organic’ or ‘real’ brands are becoming more popular. Within football, reality can arguably be diluted amongst the game’s commercial interests. The authenticity of clubs and players reduces, with both parties running the risk of inadvertently becoming pawns in a billionaire’s world.

In the cases of teams such as Milton Keynes Dons, or RB Leipzig, brands can become ultimately inauthentic. This can sever ties with previously loyal customers who come to trust the values and outlook of a certain brand. They don’t need to know the people who sit in the boardroom, but ultimately believe that they’re buying into something bigger.

Football players going into business need to be wary of brand authenticity so they do not fall into the trap of misleading the consumer. Human connections are paramount in modern business, and these can be created in various different ways. A brand doesn’t need to be centred around a person to do this, but it does need to have a degree of personality to it if the player themself is to be used as a branding tool.

Naturally, footballers can pull in large audiences. Some have access to million-follower audiences, and others don’t. Either way, footballers are all recognisable to some degree – even if just within the local community.

Let’s take a look at two brands owned by football players. One is centred around the player, and one isn’t.

The first is GG Hospitality, brainchild of ex-Manchester United stars Gary Neville and Ryan Giggs. Although Neville is prominent within sports media, he and Giggs are very much behind in the scenes with their property management, hospitality and catering business.

Brand authenticity doesn’t exist with regard to Neville or Giggs themselves. Rather, GG Hospitality’s brand authenticity comes through a defined boutique identity. Neville and Giggs are mentioned on the website and are visible in some press releases and brand campaigns, but model themselves against the brand’s identity when doing this.

Seemingly minor details, like the fact that Giggs and Neville are always pictured dressed smartly, tie into the overall image of the brand and create brand authenticity. Although it may seem negligible, imagine how out of place it would look if a website centering on luxury was strewn with images of the pair playing football?

Although football-related ventures do sit under the parent company, such as Hotel Football, each business’s branding does not override the parent group’s identity. Neville and Giggs keep the brand at the forefront, rather than their brand. By keeping this consistent throughout and only appearing where relevant, brand authenticity is arguably achieved within GG Hospitality.

And then there’s CR7.

Cristiano Ronaldo is a walking, talking, breathing brand in himself. With one of the world’s largest social media presences and most recognisable faces, he demands attention and, in turn, sales from his line of clothing and fragrances.

Brand authenticity is prevalent in Ronaldo’s case as he has essentially fused his footballing identity with his commercial one. From the name of the business alone – a play on his initials and iconic number ‘7’ shirt – to his engagement in the business’s branding, Ronaldo fans know what they’re getting: something trendy, contemporary, and recognisable.

The level of Ronaldo’s footballing ability has forged the reputation that his brand plays off of. Ultimately, Ronaldo has such global appeal that he is pretty much his brand in its entirety. This isn’t any better or worse than Neville and Giggs’ GG Hospitality venture, but like them, Ronaldo has decided on the direction he wants his brand identity to follow and has stayed true to it.

At JAX Branding, we believe in brand authenticity. To help you achieve this, we get to the heart of your business to find out more about the people behind it and the image and values you want to portray.

We know how powerful football brands are. When it comes to brand authenticity, we see things from both the player, the business, the consumer, and the fans’ perspective .